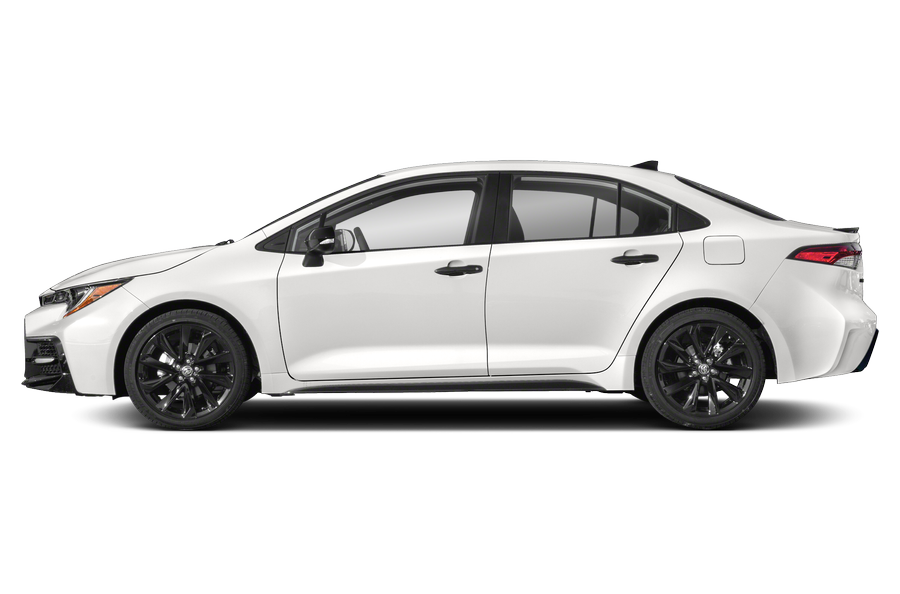 The verdict: Life is a constant tug-of-war between needs and wants, and while the 2020 Corolla Hybrid probably isn’t anyone’s dream car, it’s an approachable hybrid that solidly meets everyday needs.

Versus the competition: The Corolla Hybrid matches rivals in fuel economy and price, but falls behind in cabin finishes and cargo room.

The 2020 Toyota Corolla Hybrid is all-new, joining the regular Corolla sedan, which was redesigned for 2020, and the Corolla Hatchback, which debuted for 2019; see them compared.

It competes against other compact hybrids, including the Honda Insight sedan and Hyundai Ioniq hatchback; see them compared.

The Corolla Hybrid uses a 1.8-liter four-cylinder gas engine that pairs with two electric motors, and they’re all integrated in a smooth and natural way. That’s no surprise given it’s borrowed from the granddaddy of hybrids, the Toyota Prius.

Power comes on quickly from a stop and builds smoothly for sufficient midrange response. I’m not enthusiastic about continuously variable automatic transmissions, but the Corolla Hybrid’s doesn’t offend as much as others. (Technically, the Corolla’s hybrid drivetrain doesn’t use a belt and pulleys, which is usually what’s at play with a CVT; Toyota’s Hybrid Synergy Drive has continuously variable gear ratios and lacks the familiar shifting feel many CVTs now incorporate.) In the Corolla Hybrid, much of the usual CVT drone and numb responsiveness are inoffensive, making the car pretty quiet — much quieter than the Insight.

Other elements take some getting used to, including pedal feel. There’s too much travel in the accelerator before the power engages, and the brake has an unnatural, heavy feel that betrays its regenerative braking system. The brakes themselves have nonlinear, grabby action. Of course, this isn’t just a Corolla Hybrid problem — many hybrids have this issue.

In many other ways, however, it feels (and looks) like a regular car. The ride is compliant and bump absorption is fine. In corners, the sedan feels well-controlled, though its steering can be too light, requiring a lot of correction — especially at high speeds. There’s quite a contrast at lower speeds, where it’s weightier and more natural.

Mileage estimates aren’t quite as impressive as with the Prius, but they’re good. The Corolla Hybrid is EPA-rated 53/52/52 mpg city/highway/combined, a little lower than the base Prius’ rating of 58/53/56 mpg. It’s similar to the Honda Insight  (55/49/52) and Hyundai Ioniq (55/54/55). In real-world driving, however, some of our editors are doing much better: One saw trip-computer mileage readings of 76.1 and 78.6 mpg after a couple of roughly 24-mile commutes that combined city and highway driving and included lots of slow-and-go and stop-and-go driving. The car’s drive mode and ventilation system were both in their Eco settings, and outside temperatures were in the low 70s.

Along with the selectable Eco drive mode is an EV mode that allows the Corolla to run on battery power alone. The former, which alters throttle inputs to help maximize fuel efficiency, didn’t feel noticeably different from the normal mode, and the latter was tough to sustain. Toyota says EV mode is for short distances and low-speed situations, such as parking lots. I was only able to get it to stay on for a minute or so at a time, and it didn’t like brisk takeoffs or speeds above 15 mph. The transition between EV mode and hybrid mode, however, is seamless.

The Corolla Hybrid is offered in one trim level, the LE, and it’s obviously just a tiny step up from the base model. While nothing feels chintzy or looks cheap, the cabin uses very basic materials and has a bland design, lacking the pops of pizazz that are (surprisingly) found in higher trims of the non-hybrid model as well as the more upscale vibe of the Insight.

The controls are a highlight. Toyota’s Entune 3.0 multimedia system with an 8-inch touchscreen is standard. It sits high on the dash for great visibility, with handy volume and tuning knobs, as well as shortcut buttons for easy usability. Apple CarPlay integration is standard, as is Amazon Alexa, but Android Auto users like myself are out of luck. Toyota says we can display navigation on the dash screen via a Scout GPS Link app, but count me out for downloading another app.

A 7-inch configurable instrument screen is standard. It sits between a few analog gauges and displays speedometer, battery charge status and other efficiency-related things, including an Eco score that lets you know how efficiently you’re driving.

The backseat is less impressive. The cloth cushion is uncomfortably thin, and getting in requires some agility. I installed two child-safety seats back there, and the low roofline made it an awkward stoop to get inside. Connecting the car seats was also a challenge: Although the lower Latch anchors are exposed for easy access, the top tether anchors sit behind fixed head restraints, blocking access and preventing a forward-facing convertible car seat from sitting flat against the seatback.

The trunk is roomy enough, and the hybrid battery is mounted under the backseat, so the Corolla Hybrid has the same rear legroom and trunk space (13.1 cubic feet) as the non-hybrid model. This battery placement also allows the backseat to fold in a 60/40 split, something some other hybrids have to ditch. By the numbers, however, competitors still have bigger trunks: The Insight has 15.1 cubic feet and the Ioniq — courtesy of its hatch — has much more. The non-hybrid Corolla Hatchback has loads more, with 17.8 cubic feet of space behind the rear seats.

… to Save on Bills

The hybrid model starts at $24,055, some $3,000 more than the gas-powered Corolla LE but almost $700 less than the cheapest Prius (all prices include destination charges). The hybrid markup might sound high, but given it gets around 20 mpg more than the regular Corolla, gas savings will add up quickly ($400 per year based on current national average gas prices and 15,000 miles driven annually, according to the EPA).

The Corolla Hybrid is priced similarly to the Insight and is just a bit more than the Ioniq, but since it’s offered in a single trim level, few extra creature comforts are available. Looking for more frills? Opt for the Insight, whose higher trims offer features including built-in navigation, leather, heated seats and a moonroof.

In terms of standard safety and driver-assistance features, however, the Corolla Hybrid is loaded. It comes with the Toyota Safety Sense 2.0 package, which includes a front collision warning system with automatic braking and pedestrian detection, lane departure alert with steering assist, automatic high beams, road sign detection and full-speed adaptive cruise control with stop-and-go. The Honda Insight is similarly equipped in terms of safety features, but many active safety and driver-assistance systems are optional on the base Ioniq.

With (un-Prius-like) mainstream styling, impressive mileage and reasonable prices, the Corolla Hybrid should have wide appeal. Shoppers looking for an affordable, fuel-efficient compact sedan will want to add it to their list.

This vehicle has been inspected by our trusted partners